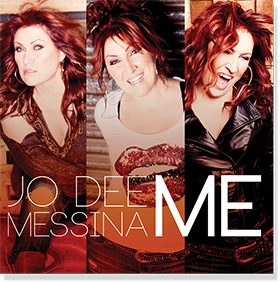 Multiplatinum, award-winning country singer/songwriter JO DEE MESSINA’s new album ME was released this week (3/18) and the fiercely independent, outspoken, and driven artist is already receiving some of the best reviews of her career for the album, issued via her ownDreambound Records/eOne Music Distribution. The Associated Press called it a “playfully vibrant album,” Country Weekly noted “heavy doses of humor and sass that set her apart,” while the Milwaukee Journal Sentinel said: “…Messina is emboldened, independent and inspired…[single]‘A Woman’s Rant’ is a fiery, banjo-picking, piano-plinking, honky-tonkin’ ode to feminine reflection and empowerment.” The album’s latest single and fan favorite, “A Woman’s Rant” is currently receiving radio airplay nationwide.

What’s being said about ME, funded by fans via her Kickstarter campaign, the most successful one to come out of Nashville and, at the time of completion, the 15th largest funded music campaign in Kickstarter.com history.

“…there’s plenty here that would convert folks if it reaches their ears, like the lead-off track–and thesis statement–‘Not Dead Yet.’  Jo Dee, in fine voiceand backed by some bluesy licks, snarls that you better not count her out, even when she’s looking pretty down. First single ‘Peace Sign’ follows the pop-country template that made Jo Dee so popular, as does ‘Strong Shot of You,’ but both offer the heavy doses of humor and sass that set her apart…where she really excels is on scorchers like ‘He’s Messed Up,’ a delightfully catchy cautionary tale that sounds more like something from Pink or Kelly Clarkson than her country peers, cheerfully proving once again that Jo Dee does as she darn well pleases.”
–Jon Freeman, COUNTRY WEEKLY (B review), 3/10/14

“Messina’s declaration that she’s still alive and well comes across clearly on this playfully vibrant album…Messina continually addresses the value of experience in her songs, as well as in co-writing seven songs and in co-producing the album with Julian King. The songs ‘Love On A Maybe’ and ‘Breakin’ It Down’ confront a partner about commitment, making it clear she needs more from him, and ‘A Woman’s Rant’ wittily rips at the fast pace of modern-day life for a working mother. Similarly, ‘Peace Sign’ uses clever, biting humor to tell a lover to kiss off…whenever the beat kicks in, so does Messina’s entertaining style. ‘Me’ proves that Messina’s fans are right to think she still has plenty to offer.”
–Michael McCall, ASSOCIATED PRESS, 3/17/14

“Country fans who like their women weak and their music vanilla will not care for what Jo Dee Messina offers on the 12 songs that make up Me. The album–funded by a Kickstarter campaign–is full of attitude. It’s an intensely personal album recorded during an extremely emotional time in the singer’s life…The album’s strength is its lyrics and storytelling. Few will remain unconvinced that she’s ‘Not Dead Yet’ by the end, although the timid may not make it.”
—TASTE OF COUNTRY.COM, 3/19/14

“The newest single from her newly-released album, Me, is classic Jo Dee Messina with a new twist. A feisty Everywoman female empowerment anthem, ‘A Woman’s Rant’ shows Messina in a new place in her life, as a harried wife and mother trying to do it all.”
–Sterling Whitaker, THE BOOT.COM, 3/18/14

“Jo Dee Messina definitely isn’t dead yet…In fact, she’s back with a vengeance, better than ever, with her new album ME…a powerhouse of an album, a musical diary, an honest look into the life of one of country music’s most outspoken and independent women…The tracks ‘Me’ and ‘A Woman’s Rant’ deal with women’s empowerment in a way that will strike the right chord with female fans as they are about women who have to wear many hats (teacher, mother, wife, employee, etc.)…Folks who donated to Messina’s Kickstarter campaign to help make this album happen will definitely get their money’s worth. ME, although seemingly cathartic for the singer, is really Messina’s gift to them, a thank you for supporting her through the years. ME is certainly going to win her an even larger and more diverse fan base, all of whom will be, just like I am, very glad that thismusical dynamo is not dead yet…and not only isn’t she dead, but I think she’s just getting started on the best part of her career.”
–Kimberly Dunbar, FLASHWOUNDS.COM, 3/17/14

“Jo Dee Messina definitely underestimates herself when she sings the words ‘I’m Alright.’ The definition of ‘alright’ is satisfactory; acceptable; reliable; good. Jo Dee is leaps and bounds above ‘alright.’ Jo Dee is phenomenal; extraordinary; remarkable; sensational. Just when you thought you signed, sealed, and delivered your list of top vocalists to ever exist, we insist that you add one more name to the top of that list!…Naturally, Jo Dee would not do a show leading up to her new album without introducing some tracks that will be on this album, which is slated for a March release. If the three songs the Miami audience heard were an indication of how the entire album will be, get ready for Jo Dee’s best to date…An inspired and inspiring artist is the best way to describe the unmistakably talented Jo Dee Messina…Consider the countdown on until we have Me in our hands, because this album will, undoubtedly, be one to keep on repeat.”
–Jennifer Swirsky, KEEPINGITCOUTRYBLOG.COM, 12/23/13

“Rock out to ‘Not Dead Yet’ and ‘Take It,’ and gussy up with girl power in ‘A Woman’s Rant’ and ‘Me.’ For all those moments when you want to get loud, shake off the haters and breathe a little fire–Messina’s sentimental and sassy fifth album is just the thing.”
–Valerie Hammond, NASHVILLELIFESTYLES.COM, March 2014

“They say it’s difficult to catch lightning in a bottle twice, right? Wrong. Jo Dee Messina defies the odds with her just-released set ME. Blasting on all cylinders, the red-headed powerhouse returns to her charming roots on the 12-track collection, but with a new found maturity, grace and poise. Whether it is the empowering opener ‘Not Dead Yet,’ perhaps a nod to her splashy rebound, or the intensely emotional closer ‘Say Goodbye to Superman’ (the best song she’s ever recorded), Messina is back in full form…the album is one of this year’s finest releases. She doesn’t skimp on sincere storytelling, such as her current rowdy single ‘A Woman’s Rant,’ which gives new meaning to sass and grit…Musically, this offering is the most interesting of all, collecting influences that range from banjo-inflected rock to the typical pop-country flare. Messina packs an electric punch here, making a clear statement of entitlement.
–Jason Scott, NASHVILLE GAB.COM (A- review), 3/18/14

“The album brings a whole new Jo Dee Messina to the forefront, featuring 7 personally penned songs within the tracklisting of twelve. The album kicks-off with ‘Not Dead Yet,’ an ode to her former label sayin’ she has no plans to go anywhere. The rockin’ anthem is perfectly suited for Jo Dee, and fans embrace having her back on country radio…A favorite song on the album, the title track “Me” hits home for me, and I imagine with many other women as well. It chronicles the many roles a woman has…wife, friend, mother, lover, secret keeper, advice giver…It’s exhausting, emotional, surprising, disappointing, and worthy all at once. There are so many more songs worth hearing on Jo Dee’s ME but I recommend you order yourself a copy and take a listen. You won’t be disappointed. It’s with great pleasure that I say ‘Welcome back Jo Dee Messina.’”
–Tawny Tucker, COUNTRY MUSIC TATTLE TALE.COM, 3/18/14

“…Messina is emboldened, independent and inspired…Her voice is strong and confident over the opening track’s roadhouse rocker…The title track is a personal ballad of steel guitar and aspirations. ‘A Woman’s Rant’ is a fiery, banjo-picking, piano-plinking, honky-tonkin’ ode to feminine reflection and empowerment. Who needs a record deal when the backing of the people can garner results like this?”
–Eric Ernst, MILWAUKEE JOURNAL SENTINEL, 3/18/14

“The songs are honest and fun and showcase her spicy, spunky attitude as well as her strong, confident vocals…Any working mother will absolutely love and relate to ‘A Woman’s Rant.’ It’s a banjo infused, foot stomping anthem for the woman who does it all…Jo Dee’s latest album proves she is alive and well…and thriving!”
–Tara Toro, GOTCOUNTRYONLINE.COM, 3/13/14