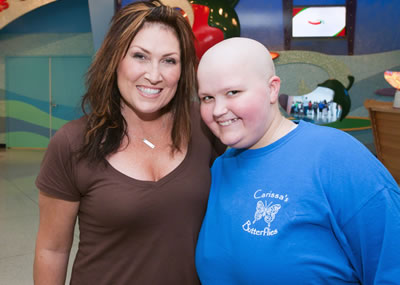 by Gayle Richardson – The Boot
Lady Antebellum, Julianne Hough, Danny Gokey, Jewel and Jo Dee Messina are among the artists who have signed on to participate in St. Jude Children’s Research Hospital’s seventh annual Thanks and Giving Campaign. The fundraising effort will utilize social-network sites, iPhone and Blackberry apps to encourage fans to donate. The country artists join other celebs including Katharine McPhee, the Jonas Brothers, Daisy Fuentes and Danna Garcia, who will get the word out to their fans throughout the holidays, to encourage donations from now until the end of the year.

Lady Antebellum are already partners with St. Jude as part of Musicians on Call, which brings music to the bedsides of hospital patients all over the country, including the Memphis-based facility. “Music is so healing,” Hilary Scott tells The Boot. “Whether you’re in a hospital bed or you’re driving down the road just broken up with your boyfriend, it has such a healing power. What better way than to go into hospitals and equip musicians to sing for these patients who are just looking for a smile?”

As part of the multi-faceted campaign, those wishing to make a donation can text the world ‘HOPE’ to 90999 to donate $10, give a virtual gift for a minimum of a $5 donation, or simply visit the campaign’s website here.