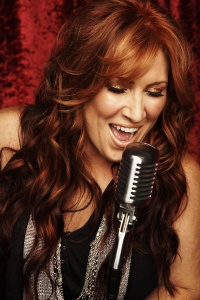 The Daily News
Country singer Jo Dee Messina played to a crowd of 1,800 listeners at the Cowlitz County Fair last week.It was mostly a good-times show — except when the subject was the late Ralph Painter, the Rainier police chief who was shot and killed in the line of duty on Jan. 6.

Messina dedicated her song “You Were Just Here” to Painter, as sheriff’s deputies unveiled a portrait of the chief.

“I’ve never done that song in a show,” she said. “It was physically and emotionally draining for me.” In a reversal of the typical gifts bestowed on singers, Messina gave a flower bouquet to the deputies.

She followed with “Heaven Was Needing a Hero,” a ballad she wrote after the first female American soldier died in Iraq.

Though country concerts often include a sometimes formulaic appeal to patriotism, Messina came across as sincere and as deeply moved by the police chief and soldier’s deaths as her fans were.