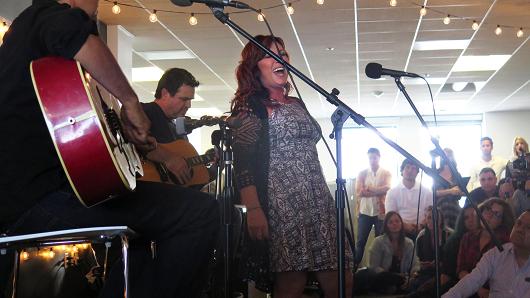 Country singer Jo Dee Messina popped in with her band on a toasty afternoon in late July to entertain over 100 employees. She was in town for a concert at the jazz club Yoshi’s.

Messina, whose latest album was funded through a Kickstarter campaign, told the Pandora audience that she’d met with some company representatives at the Country Music Association festival a few weeks earlier.

They suggested she come in and perform ahead of her show. Messina was so taken by the outreach that she wanted to go bigger.

“I said we need to do something more, like have a big Pandora bus going around the country,” she said at the start of her half-hour set.